One of the most notable places Lester gone drifting is the St. Lawrence River — a popular Bassmaster Elite Series destination and the nation’s Number 1 bass fishery for 2019, as ranked by Bassmaster Magazine. However, Lester points out that this style of fishing will produce in other well-known waters.

"It’s kind of a niche deal," the Tennessee pro said. "You need super clear water in that current because smallmouth are sight feeders. That’s definitely the best way to target them on the St. Lawrence, but I’ve caught them in the St. Clair River and the Detroit River, which connect Lake St. Clair to Lake Huron and Lake Erie. The biggest thing is you need clear water so the fish can see the bait."

What To Look For

Lester knows smallmouth in swift river scenarios like any type of anomaly that creates a current break that they can use for a feeding station. Common types of habitat include big boulders, shoals and high spots.

In the St. Lawrence, he has fared well on spots rising from 40-45 feet of water, up to about 20-25 on top. Precise positioning of fish will vary, but Lester knows that there will typically be a pattern he can replicate elsewhere in similar spots.

For example, during the 2018 Elite event on the St. Lawrence, they were on front side, so I would start in that 45-foot zone and as my bait started coming up the actual rise and onto the top of the shoal, that’s when I’d get most of my bites.

This year (2019), most of my bites came on the back side of the shoals, in the actual current break — in the eddy. It just depends on how they’re set up, but it’s definitely something to take into consideration because there will be a pattern."

Lester notes that he rarely drift fishes deeper than 45 feet. It’s not that he can’t catch fish beyond that range; he simply believes the bigger, more aggressive fish will position higher. One consistent point: When he graphs fish on top of the high spots, he knows those fish will bite because they’ve moved up to feed. 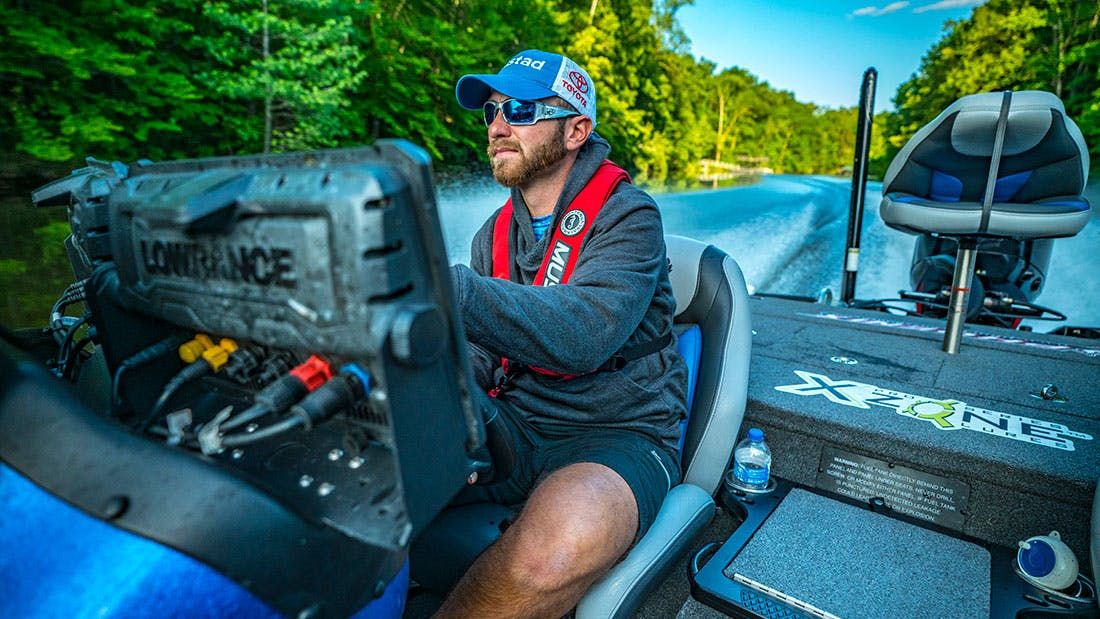 Lester starts his drifts about 70-80 feet above his target, as this allows him time to deploy the trolling motor, pick up his rod and prepare for his presentation. This, he said, is a critical stage because you don’t want to miss the fish.

"Most people want to make a cast and get way out there, but the best way is to keep your line perfectly vertical," Lester said. "It’s very important to keep your bait on the bottom, and maintain contact. If it gets too far out, you don’t know what your bait is doing."

As he reaches the back side of the structure, Lester drifts another 50 feet to mop up any stragglers.

Lester gets most of his drift work done with a dropshot. He’s partial to the X Zone Lures Slammer, an effective goby imitator that he rigs on a No. 4 Mustad Titan-X Wacky/Neko hook. Goby colors work best in the St. Lawrence, but he’ll also use minnow patterns in St. Clair and other drifting theaters.

For pressured fish that have seen too many dropshots, Lester will switch to a Ned rig presentation. Here, he pairs an X Zone Ned Zone bait with a Mustad Grip Pin Ned Head in a size appropriate for the depth and current speed. With either bait, Lester says impatience kills.

"The biggest mistake is trying to rush them," he said. "Just let the fish run and when he finally presents the opportunity, just slip your hand under his belly and lift him aboard,” Lester said. “If you try to rush them, you’ll lose them every time."