Habitat options are many, but from the pristine flats of Florida’s Gulf Coast to the vast expanses of Texas’ Laguna Madre waters, shallow fields of swaying seagrass offer tremendous opportunities. These shallow pastures offer prime grazing opportunities for a fish that’s perfectly designed for nosing through bottom cover to root out meals. During low tide, the fish slip into adjacent depths of channels and cuts, while higher stages find them moving progressively higher onto the flat.

Singles and small groups of redfish can be surprisingly stealthy, but when you pack several dozen or more reds into a feeding school, it’s hard to miss their rumbling, water-rippling movement. On clear days, over a mottled bottom of sand and grass, the herd will cast an auburn hue in the water, so keep watch for such masses and the waking convoys.

Also, take note of shrimp or baitfish flipping from the water. These forage species are much happier below the surface, so take their acrobatics as a clear sign of predation. Likewise, spotting a glossy sheen on the water’s surface typically indicates a recent feed in which predators left a slick of baitfish oils in their passing. This could be any number of predators, from jacks to mackerel – but on fall grass flats, it’s often redfish. 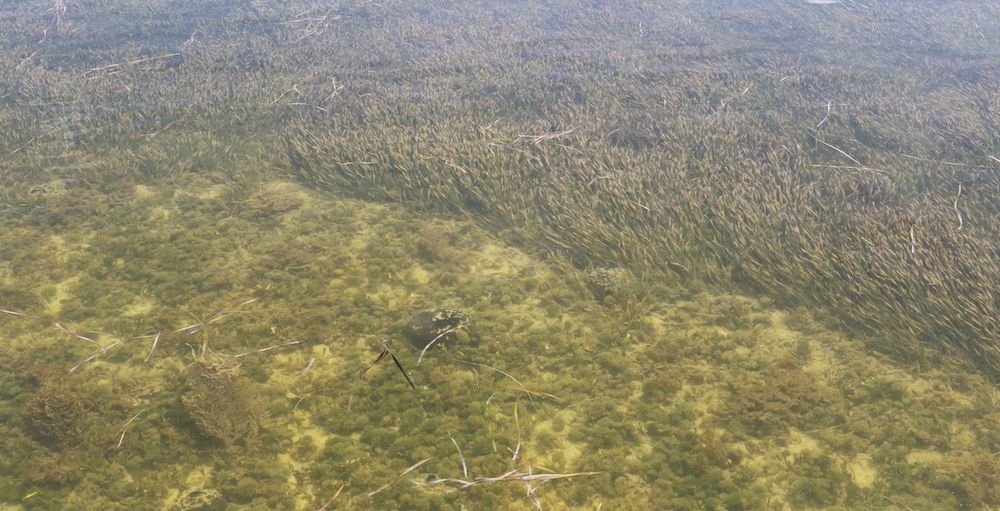 While the sardines, crabs, shrimp and pinfish packing the grass flats won’t go unnoticed by redfish, the vegetarian mullet couldn’t care less? So what’s the connection? It’s pure opportunistic feeding. The less energy a predator expends to intake calories, the more they retain. For redfish, that means mingling with mullet often rewards them with a finfish or crustacean meal that they didn’t have to work for. Mullet schools displace these meals while churning across the shallow grass flats and savvy reds are quick to pick off the freebies. For anglers on the lookout, locating a mullet school, either by spotting their wake or seeing their characteristic leaps, is a great way to connect with opportunistic reds.

Lead head jigs, like the Mustad Inshore Darter in the 1/8- to 3/16-ounce range with paddletails or shrimp bodies are one of the most common redfish baits for targeted casts. For a bottom-hopping look, try the LIVETARGET Fleeing Shrimp

Another highly effective option is a popping or clacking cork with a LIVETARGET Rigged Shrimp below. Chugging the cork creates a commotion that resembles feeding fish, and the vulnerable bait is an easy sell.

For searching, weedless spoons are considered one of the top redfish baits, as they cast like a bullet – even on windy days – and easily traverse a range of shallow habitats from grass to oyster shells. Tip: Spoons are given to spinning on the retrieve, but adding a Mustad Nickel Round Split Ring and a Mustad Barrel Swivel minimizes line twist.

And don’t overlook topwater baits. With their subterminal mouths, reds are definitely built for bottom feeding; however, their inherent feeding aggression won’t allow a surface bait to pass without interception. A little awkward, not always pretty and far less efficient than, say, a speckled trout’s topwater attack, a redfish is a persistent creature and theirs is one of the most aggressive surface assaults you’ll ever see. It’s kind of a surging, crashing bite, but once a red locks onto a topwater target, it’s nearly a guaranteed hook up.

A little tip for greater topwater efficiency over shallow grass: Replace stock treble hooks with Mustad Kaiju Inline Single Hooks. Face the front hook forward and the rear hook backward. You’ll give up the number of hook points, but once a big red gets the bait, that’s a caught fish.