They call it “cocktail fishing” for its laid-back, relaxed atmosphere, but at the moment of truth, this deal is anything but peaceful. Not surprising, 50-plus pounds of Mississippi River catfish doesn’t take kindly to being tugged from its lay-low spot and that’s something Capt. Ross Montet knows full well.

“We would get daiquiris from the drive through place down the road and then go dump the fish scraps in the river an hour or so before dark,” the Buras, La. guide said. “The ramp down the road from the lodge is just an easy place to get rid of the carcasses and because we do it every day, the fish get used to it.”

Notably, Montet’s Delta catfish routine actually began as a response to happenstance. Ryan Lambert, who owns Cajun Fishing Adventures where Montet guides, was dumping baskets of trout and redfish carcasses from his guides’ recent day trips when he noticed immense boils and frothy explosions downcurrent of the ramp. Noting that it was big catfish, he figured that the fish were residents that utilized the nearby holes and drops for their napping spots and rose to feed on current-borne meals.

The moderate sized baits are big enough to hide the hook and substantial enough to get noticed, without risking deep hooking.
- David Brown

Once Montet and his fellow guide Capt. Cody Obiol got wind of the deal, they quickly dialed in the routine. The two anglers rarely have to venture far from the launch ramp just south of Lambert’s lodge, but their routine will work just about anywhere along the river (above the saltwater wedge, of course).

Since most of this fishing is done after dark, it helps to scout around during the day to mark big fish so you have a land-based reference for your starting spot. Big blues like any kind of current break from natural contour, to log jams and sunken cars; but they’ll also follow bait schools, so pay attention to any pogie or mullet schools you mark.

Once in position, Montet drops 2-inch chunks of trout belly for bait, while he uses the guts, skin and trimmings for chum. The moderate sized baits are big enough to hide the hook and substantial enough to get noticed, without risking deep hooking.

You can target Delta blues with Carolina rigs, fish-finders, or knocker rigs but Montet does best with a beefed up, modified dropshot. He first attaches a 6- to 8-ounce bell sinker to his leader’s terminal end with a Palomar knot and then forms a dropper loop about 5 feet up the line. 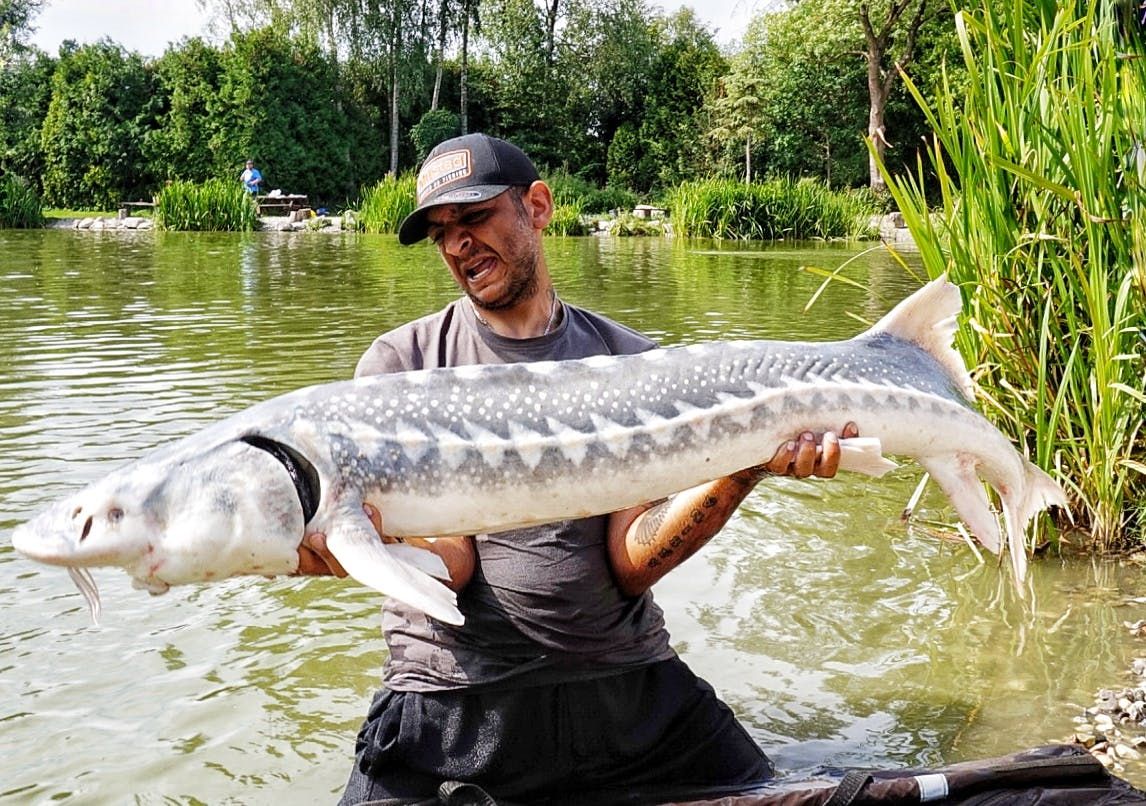 Pushing the loop through the hook eye, he’ll pass the loop over an 8/0 Mustad Ultrapoint Demon Perfect Circle Hook hook and cinch the loop against the line on the backside of the eye. This arrangement facilitates quick hook change.

Montet deploys his rigs on heavy spinning outfits or stout conventional outfits with 7- to 7 1/2-foot rods and 80- to 100-pound braided line. The muddy river water and low light conceal the braid, so there’s no liability for the extreme sensitivity, which helps him detect light bites, or the zero stretch that facilitates distant hook sets.

Netting giant cats is a must, but no matter how strong your net is, the physics of handling these giant slime balls demands consideration. A technique that Montet uses for bull redfish translates well here: Secure your catch in the net, turn the handle upward so the fish rest easily in the mesh; then, instead of lifting laterally, grab the frame and pull the whole wad of weight over the gunwale.

After a few souvenir pics, give the big guy a few minutes to recharge his batteries at boatside, then send him on his way to get bigger and stronger for future battles.